Why are My Gums Bleeding? Your Mt. Holly Dentist Answers 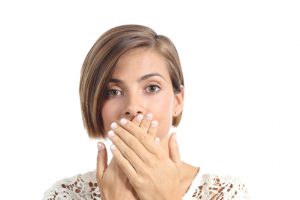 Do you see blood in the sink when you brush or floss your teeth? Don’t ignore this all too common oral health symptom. If you find your gums bleeding, contact Mt. Holly Family Dentistry for a check-up. Drs. Greenberg, Govitrikar and Cygler will determine the reasons and help your gums heal.

Should You Be Concerned?

If your gums are bleeding, yes, you should be concerned. Healthy gums are pink, firm and basically immobile. During a routine oral examination, your dentist or hygienist measures gum pocket depth, the space between the teeth and gums. Measurements of one to three mm are considered normal.

Bleeding upon brushing, flossing or simply touching the gums with a dental instrument are symptoms of concern. They may indicate gum disease, an oral health malady affecting millions of adult Americans–so much so, in fact, that gum disease is one of the biggest reasons behind tooth loss in the United States. In its mildest form, gum disease is called gingivitis and in its most serious form, periodontitis.

In addition, gum disease is linked to many serious systemic diseases such as heart attack, stroke, Type-2 diabetes, rheumatoid arthritis, pregnancy complications and dementia. Researchers feel that the inflammation resulting from plaque and tartar, and their associated bacteria, is the culprit behind the compromised health many individuals with periodontitis have.

Other Reasons For Bleeding Gums

The dentists at Mt. Holly Family Dentistry say gums bleed for other reasons, too, including:

The dentists suggest keeping your gums healthy with a twice daily brushing and flossing routine to remove toxic plaque from between teeth and at the gumline. Additionally, drink eight or more glasses of water a day for adequate hydration, and eat a nutritious, low-sugar diet. Some studies suggest Vitamin C maintains healthy gums. Plus, foods such as beans, celery and onions are great antibacterial choices.

The best treatment for bleeding gums is prevention. Brush and floss and also get semi-annual check-ups and cleanings at Mt. Holly Family Dentistry. If gum disease occurs, the dentists use gentle tooth scaling and root planing to remove plaque and tartar and help gums heal.

If your gums are bleeding, please contact Mt. Holly Family Dentistry for an appointment. The professional staff can help you achieve a bright, healthy smile!

Comments Off on Why are My Gums Bleeding? Your Mt. Holly Dentist Answers

Sorry, the comment form is closed at this time.